How a game changed thanks to empathy

Most of my career I’ve been involved in developing mobile games. Of many lessons learned in this very particular way of creating entertainment, the one I cherish the most is to respect your players. Empathy is the number 1 skill I believe a designer should have in any field, and a precious one in this industry of ours. This case study revolves around a yet unreleased game in which I played a part in-between game design and narrative design. Here is the story of how being empathic to our players saved our game.

We had been on pre-production for a new mobile game for over six months. In mobile-years, that is a lot of time. Trends are tenuous, and bright new ideas are like unicorns. If you want to hit a bullseye, you better do it fast. Coherently, we decided not to venture into uncharted waters - the game was a mix of well-known casual mechanics, what we call a hybrid, a match-3 game with a narrative-driven side loop. In human terms, it’s like Candy Crush where you use your earned stars to build a house and follow a story.

As we knew so well what the actual gameplay was, we took from there. There would be a match-3 loop, of course, leading the player to another loop. To decide what you would do there, we had to pick a theme. What does market research say? Our target audience likes decoration! Great! So we’ll make it interior design. You play match-3 here and go somewhere where you do some interior design.

What sounds like a very simplistic description is the game we spent six months making a playable version. Also, also the game which crashed and burned on its first playtests.

As you may imagine, that’s not how it was planned to work. For starters, the information we had on who was our target audience was very superficial. The primary data was demographics: female, living in the US and UK, somewhere between 25 and 45 years old. That’s an enormous population and doesn’t get you even close to understanding who you are trying to reach. We tried to dig deeper: what games do they play? What are our benchmarks?

Benchmarks can bring you some answers but, speaking from a very personal perspective, they tend to become a guideline for everything on the game where they should be more of a data/experience reference. The context, what they do different, even art direction, it all varies a lot when we are talking about games. There’s no such a thing problem your product addresses; the product itself creates and solves the problem. Unless your game is an exact clone of a benchmark (pro-tip: don’t do clones), there’s only so much information you can get from a game you have no in-depth knowledge of the development process. Yet this information is, still, very superficial.

So I moved on a different approach. Collecting whatever data we had of the audience from previous games of the same company, I traced profiles for a persona, the one player we would like to enjoy our game. That persona was Joanne. Unlike our previous wide audience, Joanne wasn’t on an age range. She is 35 years old, a late millennial. She enjoys decoration, of course, but mostly via Pinterest. Her own house is not much of a magazine-worthy sight, mainly for the lack of money to decorate it as Joanne would like. She enjoys the fantasy of being a decorator, while also having some me-time with a fun puzzle game that doesn’t challenge her too much. Life and the bills to pay are challenging enough. Joanne had her likes and dislikes, musical tastes and catchphrases. She was a person, a fictional one, yes, but most of all a player and not a user.

The problem is - we didn’t have time for Joanne.

We got so caught up in what the gameplay was supposed to be we forgot what the game was about. There were camera settings to make house’s walls go up and down; an impressive 3D gift box spinning and opening up when you got a reward. However, when the playable build came, we had an insensitive product instead of a heartful experience. That’s when we realized something went wrong along the way. Although six months have gone by, an abyss in mobile-years, we decided there was still time to make amends.

The first thing we noticed on how the game failed was precisely what we cherished the most to date: its gameplay. We had a very complex system to buy furniture and build houses for several different clients. The simulation itself felt very strategic, while the single most apparent problem hung in our faces: Joannes won’t come to this game to make a strategy. They come to have fun solving puzzles and to play dollhouse afterward. It felt nothing like a dollhouse; the game projected on players some coldness, pressure and other emotions we wanted to steer clear of.

We had to change the way the system presented itself. If it has to be complex, we had to make sure most of the complexity lies on our side, the developer, and not on the players. Bear in mind challenging is not the same as complicated, for better or worse.

The second problem was that the narrative - a selling point for this kind of hybrid game - was utterly forgotten. We had as a guideline that the game had to work over its mechanics and context would be a plus. The problem is, that’s not what Joanne wants. A narrative is not only the story you tell but how you experience the whole. Our player wanted to buy the fantasy, to feel like a decorator. There were few nods to the fact you roleplay as a decorator, and even fewer emphases to the feelings related to decoration: cleanliness, tidiness, turning the ugly into beauty. It was all about matching pieces and saving money to buy the right stuff. What narrative do you take off it?

So the way we delivered narrative had to be redesigned along with the experience itself - narrative design in a nutshell. I went back to the drawing board and drafted what I called “the narrative cycle,” a way to visualize the player’s journey via our central in-game measure, the duration of a client’s house. Here’s a simplified version of it: 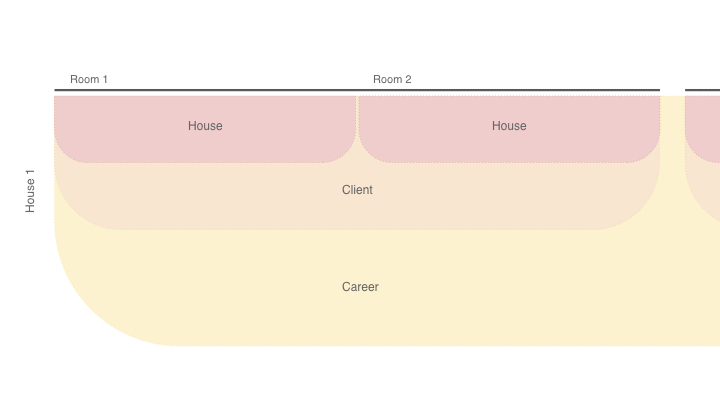 Here I highlighted the three main arcs in our narrative: the house arc, the client arc, and the career arc.

• The house arc is closely related to the player’s actions in the game. Each room had a structure on itself - introduction, conflict, plot points, resolution - related to what the player can interact within the game. We’re not just talking about triggering dialogues but experiencing a short-term narrative within a room.

• The client arc is character-centered. Each house belongs to a different client, living their dramas, with their troubles and personality traits fully affecting your job making them a new home. That was one of the core concepts I set up with for the story: there had to be emotional involvement with the characters, you had to feel they were real people and not just someone who asks you for a purple sofa. For mobile games with ongoing development, attachment is critical. Relating and caring about characters is a positive and soft way (if used right) to make a player keep coming back. The client arc carried on deepening the client’s character, presenting the core conflict over the superficial starting point of decorating their home.

• The career arc is all about the player itself. We took a calculated risk on the game to give the player a face, an avatar with its name and life history that you would roleplay as. I wanted to empower this character with the qualities and faults that would ultimately build a great decorator. Moreover, it was hugely important that the player felt good about having some faults, feeling like a real person digging her way to professional success and personal satisfaction. The career arc is the long-tail of the game, the aspirational path of becoming who you are meant to be. The moral here is that any small act (interaction with the game) could affect lives for better (getting involved in the clients’ personal conflicts) making you a better decorator.

With that in mind, we mapped the whole game. At that point, it became crystal clear that any difficulty the player would expect to have had to be condensed into the match-3 loop, the actual gameplay place to do the hard stuff - get money, get inspired, find the resources to decorate. The decoration itself was all about positive reinforcement loops: buying a perfect sofa; making the place beautiful; helping your clients; becoming an experienced decorator. As I mentioned before, the progression system in this loop felt quite strategic, as if you could have spent much time getting money in the match-3 and still make a choice your client wouldn’t like.

In this new progression, every choice was right. You, as the main character, get to know the client and what he/she likes. You do your research, come up with references. Every decision follows your client’s taste and, even more, their needs. The client might not be fully aware of what are those needs, but as you get involved in their conflicts, you realize there are ways to help. Say, a big kitchen for a distressed couple who loved cooking and met because of food. Choices had heart and lead to emotions.

In a few months following this new direction, we had a different game in our hands. Playtests were coming back with positive results; players wanted to see more of those people’s lives. It wasn’t just about decorating anymore. It was about Joanne roleplaying as a decorator but also as a human being. We surrounded the game with empathy, in and out. It finally became something different, despite being built over data and benchmarks - which is why, even though not out for the real Joanne to find yet, I’m very proud of the work we did here.